Terror at the Tiki Bar is Now Available!

It’s here! In this long-awaited fifth installment of the Whodunit Pet Cozy Mystery Series, Sarah, Emma, Grandpa Larry, and the rest of the folks in Cascade Cove are back for another adventure! 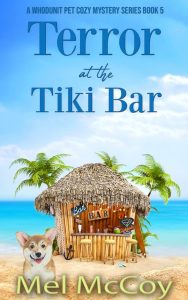 It’s the start of tourist season again in Cascade Cove, and the town is bustling with excitement as they get ready for the crowds. Sarah begins surfing lessons with Teek, while Grandpa Larry anticipates the grand reopening of Larry’s Pawfect Boutique. That is, until there’s another murder. When Teek’s new pineapple drink is found lying next to the body of his rival, Teek becomes the number one suspect.

As the evidence piles up against her friend, Sarah scrambles to prove his innocence before his business goes under. But her eagerness captures the attention of an unfriendly stalker who is possibly the murderer, placing a target on her own back. One disaster leads to another, sending Sarah down a twisted path of threats and danger that spreads to the ones closest to her.

Will Sarah catch the killer before it’s too late? Or will her meddling finally catch up with her, leading to her own demise?

Join Sarah and the rest of the gang at Larry’s Pawfect Boutique in this exciting Whodunit Pet Cozy Mystery Series. Get nestled in your favorite chair, put on a pot of tea, and escape into the cozy beachside town of Cascade Cove!

Battered at the Beach House is Out Now!

I’m very excited to announce that the sixth book of the Whodunit Pet Cozy Mystery Series is now available! Here’s the blurb: Sarah is ready to break out on her own when she learns about Read more…

I’m happy to announce that the fourth book in the Cruise Ship Cozy Mystery Series is now available on Amazon! Here’s the blurb for Book 4: Craziness ensues in the kitchen of the Splendor of Read more…

I’m excited to announce that the second book in the Cruise Ship Cozy Mystery Series is now available on Amazon! Here’s the blurb for Book 2: Another cruise is off to a deadly start… Ruth Read more…